Stephen Pakbaz, a mechanical engineer at NASA’s Jet Propulsion Laboratory (JPL) who actually worked on the Mars Science Laboratory (MSL), also known as NASA’s Curiosity Rover has built a small LEGO model for others to build and enjoy! 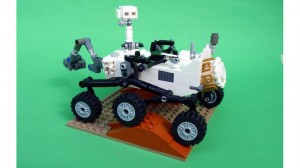 This model features an offset differential suspension system that works so well on Mars, and this video on Flickr shows that it works well during play as well!

One can also build the descent stage and sky crane pictured below! 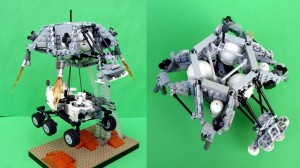