The Geneva Mechanism takes smooth rotary motion and converts it to intermittent rotary motion. One can think of it in electronics terms as changing the duty cycle of the oscillation.  This is a mechanical version.

Geneva mechanisms were invented in Switzerland for use in clockwork so that the hands of a clock would snap rapidly to their new positions rather than move smoothly across the face of the clock. They are also used to advance movie film in film projectors and are responsible for that clicking noise that film projectors make. 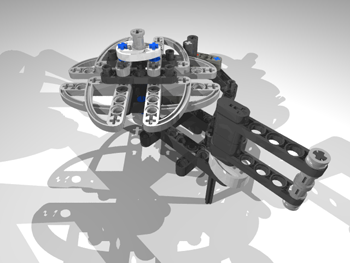 Here is a rendering of a Geneva Mechanism designed from LEGO parts. This rendering was made using MLCad in the LDraw package in conjunction with L3PAO and POV Ray.  Below the mechanism in operation.  This process will be described in detail in a future post.

The building instructions are straightfoward and can be downloaded in this zip file.

I am looking into using such a mechanism in a LEGO laser scanner, which can be used in instrument or robotics applications.

A smaller LEGO Geneva Mechanism created by Leo Dorst of the Intelligent Systems Laboratory in Amsterdam can be found here, although I have not been able to get it to work myself.